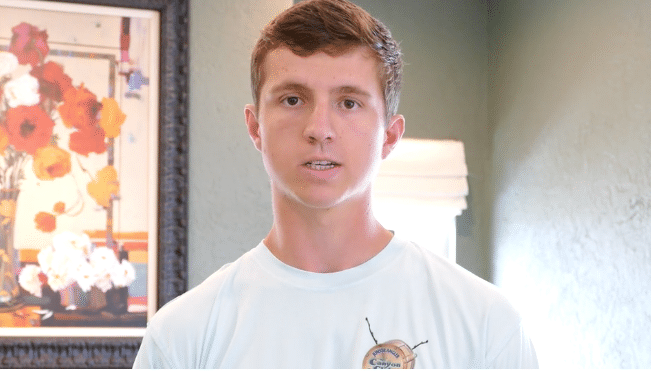 The reason I initially contacted Dr. Henny was because I was experiencing significant jaw joint pain right around here in my jaw. It was probably over a year of pain, and really I was just experiencing a lot of frustrations, since I’d go out to dinner and couldn’t eat a burger or something. I would have to take the burger apart… the bun, the burger, being as thick as it is, I couldn’t enjoy it because I couldn’t open my mouth as wide. Or I’d just wake up in the morning in excruciating pain, having to sit through class, having the jaw pain be a really big distraction, and I just wanted to get it resolved.

When I first came in to see Dr. Henny we had the consultation and everything and he seemed very encouraging of the fact that although I was facing a problem that he could solve it. He could make things better in the near term and so I was really excited about getting this issue solved and just really improving my life.

Initially we just talked about the problem. We discussed some ways that he would be able to fix my jaw, and then he took me in the back and did the tests and got some information on my jaw and the problems that I was facing. And really we talked through a plan about how we were going to fix my jaw joint and put the plan into action.

So initially before coming to Dr. Henny I thought that this was something I’d have to have surgery for which, you know, obviously is not something I wanted to do. I didn’t want them…anyone really… giving me surgery. That sounded like a pretty miserable thing. I figured I could pretty much fight through the pain and just deal with it. But Dr. Henny really assured me that I wasn’t going to have surgery, that it was something that could be solved through more muscle therapy and everything. So he started me off with this mouth guard here for the bottom of my mouth that really started the process off in the right direction and as we hit roadblocks along the way he was able to adjust the plan and give me one for the top of my mouth because instead of grinding my teeth I was more so clenching it. So he was able to kind of adjust the plan and really solve my jaw joint problems as we went forward.

I started treatment… I guess it was early fall of 2015, and I think the treatment lasted about six months and I really started to feel some results after the first month even, and significant results a couple months in. And ever since then, I haven’t really had much pain.

Really I would recommend that anyone who’s really having jaw joint pain and suffering through this problem just go ahead and set an appointment with Dr. Henny to get your TMJ fixed right. Because it’s not worth sitting around waiting and just saying, “I’ll just deal with it for another day,” or, “I’ll deal with it another year.” It’s something worth getting fixed, especially if it’s not something you have to do surgery for. I mean, it’s a pretty simple therapy process of retraining your muscle memory and making things better. I think it’s worth coming in to see Dr. Henny.